(August, 1957– I was not yet five. The two boys with me in the picture were sons of one of my parents’ friends who were camping with us.)

Making special memories with your children is not always easy for working parents to do, but it is one of the most important. Our parents were hard-working people, but they understood that kids are only kids for a short time. Every childhood memory of my summer vacations includes a two-week camping trip to one lake or another.

For many years we went to Bass Lake near Yosemite. I loved the water, could hardly get me out of it, but I wasn’t a great swimmer, yet. However,  thanks to my sister Carol, I learned to float on one of those trips. And then there was the time I fell asleep in our boat when I was supposed to be the observer while my older sister skied behind. By the time Dad noticed he was only towing a rope, she was quite a ways back, her head bobbing above water. Oops! Sorry, Bonnie.

October, 2017, I had a chance to revisit Bass Lake. Sixty years later! Standing on the shore near the falls, looking across to where we used to camp, brought a flood of happy memories. The campfire shout around the lake in the evening–“Elmer…. Mother’s calling!”  (Or so, I recall.) Boating. Swimming. “Observing.” The falls. Day trips to Yosemite. But, as an adult, the lake looked so much smaller. (Most things in the world are big through the eyes of a child.) It was wonderful to see through my childhood’s eyes once again. Thanks for the memories, Bass Lake. 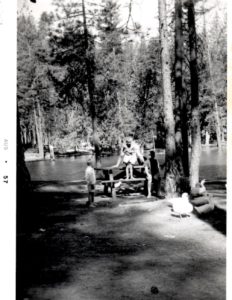 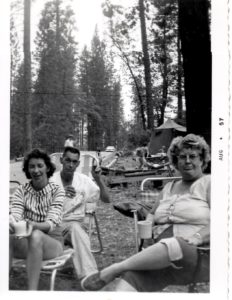 Journey to Certification, Part 2:   Bone marrow transplant day arrived in March, 2013. It was quite an experience and an amazing process to be a part of. I was grateful to have my older sister by my side that day. We laughed. We cried. She fed me, because I  was not allowed to arms. She kept tabs on both Carol and I throughout the day. We understood the importance of what was about to happen, the chance to save our sister,  but we knew there was no guarantee. I produced over 9,000,000 stem cells in the 4-5 hours of collection. About two-thirds of those were given to Carol around 5:30 pm that same day. The rest would be frozen and saved for another time, another person, perhaps. We were all gathered around her bed and watched as the transplant took place. Hope, love, and gratitude filled the room.

The next seven months did not go as hoped. Even though I was a perfect match, the cancer fought against the transplant. Her body did its best to fight back. Blood tests kept showing low magnesium and potassium levels, and she endured hours and hours of infusions. The doctors decided to give her a second dose of my stem cells, but still the leukemia would not give up. I felt like I had failed her. How could this happen? Did the doctors underestimate the strength of this cancer which they knew so little about when they decided to go with a lighter prep regime? Was I such a close match that her body could not distinguish between my cells and Carol’s?  Everyone was so disappointed, but still she fought.

Another donor was sought, someone not related. A second transplant was to be given in February, 2014. One of her daughters and a granddaughter were her care-givers in 2013, but they couldn’t be there in 2014. I was asked to fill that need and willingly accepted. Things seemed to go better at first, but eventually, the cancer would win. Carol fought a valiant fight for four long years. The literature on her disease predicted at most 18 months after diagnosis, so she did beat the odds. She passed away in May 2014.

Her passing created a heavy feeling of loss, but also a feeling of greater love for my sisters. An Olson Family Reunion was planned for July 2014 by a cousin in Minnesota for the purpose of reuniting the last two living sisters born to Emil and Marjorie Olson–one lived in Minnesota and was nearing 100 years of the age; the other, her baby sister, lived in California. This is just what I needed–a new purpose. After losing my sister, I was bound and determined to make sure these two sisters, my aunts, would be together once more. I convinced our aunt, the one in California, to make the trip out to spend a week or more with her sister. I would drive and my older sister would accompany us. What a great adventure we had! So many memories.

But that tale is for another time…

Journey to Certification, Part 1:   In January, 2008, the beginning of my 32nd year as a California public school teacher, I decided to start doing some retirement planning. I had enough years in to retire at that time, but I wasn’t old enough. So, I made a five-year plan and set June 2013 as my retirement date. If I knew then what I know now, I may have retired in 2008.

In February 2008 my mother-in-law had a stroke at her home on the Pacific coast, over four hours away from where her middle son and I live. As her power of attorney, he was responsible for making sure she was taken care of, but it would be too difficult to manage that care from so far away. The stroke was not debilitating, but is was unsafe for her to drive or to live alone.After a short stint in the hospital and a month in rehab, we brought her to live with us. I worked out a reduced-day assignment with the district and became her primary caregiver. My husband hired someone part-time to help out while I was at school. Caring for her was not difficult physically, but it was trying emotionally. Both of us were strong, independent, alpha females, and we often butted heads. Nine years later, she is still with us. She has had more TIAs since then, especially in the last two years. She is more frail and demented, and caregiving has become more demanding in some ways. Yet, she accepts her circumstances and makes the best of them without complaint. Thank goodness.

Then, in September 2010, my middle sister Carol was diagnosed with a rare form of T-cell leukemia. She went into remission at least twice with chemotherapy, but the cancer was relentless. Eventually a bone marrow transplant was needed. In December 2012 our older sister and I flew to Denver, where Carol was being treated. We volunteered to be tested, on the outside chance that one of us could be her donor. In January 2013, while waiting for my husband to be taken in for a partial knee replacement, I received the call. I was a perfect match! Hallelujah!

Besides care-giving responsibilities at home and being needed by my sister, many other things were going on at this time, all of which would aid in my decision to retire in February of 2013 rather than in June. In 2010, my arthritis was throwing fits to the point that I went through a series of joint fluid injections and several weeks of physical therapy for foot and knee pain. After a bad fall, I had two separate surgeries to repair meniscus tears–first in one knee, then the other. In November 2011 our daughter Katherine gave birth to her first daughter. She had her second daughter in February 2013, while I was in Denver doing the prep work for the March bone marrow transplant.

Winter/Spring season of 2013 was shaping up to be a busy time. I was needed at home to care for my mother-in-law. I was needed in Denver to help my sister. I was needed in Southern California to help with a new granddaughter while her 15-month-old sister underwent eye surgery. I was needed to tend to my husband after a second partial-knee-replacement surgery in March. It would be impossible to be where I was needed and keep teaching. My family needed me. I met with my principal and district superintendent to explain the situation. They were both very understanding and agreed that “family comes first.” My last official day in the classroom was February 15, 2013. My life would never be the same.